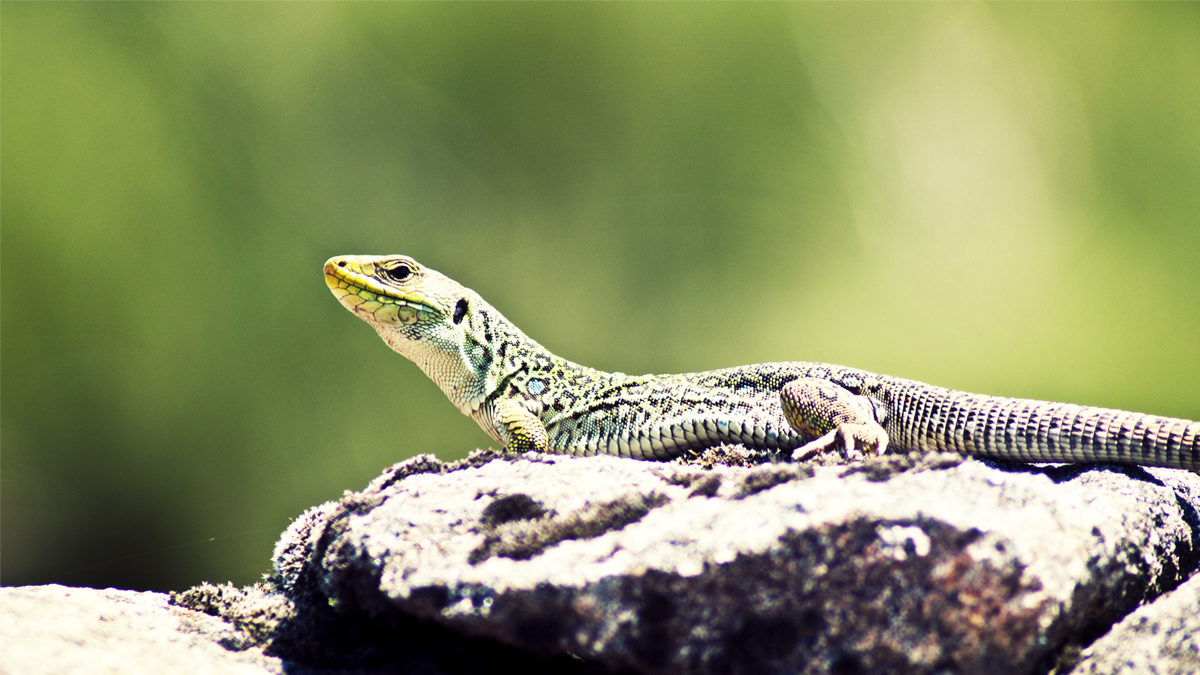 The Ocellated lizard is the largest lizard in the Iberian Peninsula, with a widespread distribution throughout the Peninsula (with the exception of the Cantabrian Mountains), south-eastern France and north-west Italy. It can be found in a variety of habitats ranging from the sea level to mountain regions such as Serra da Estrela and the Pyrenees. This species has a preference for areas with good sun exposure and with shelters such as stone walls, piles of stones or places with dense woods nearby, also avoiding excessively humid and dark areas. It can dig their own burrows or alternatively use holes already dug by other animals (such as rabbits for example) or even use crevices in rocks, walls or tree trunks, as shelter.

During the winter it ceases its activity, hibernating for varying periods of time, depending on the climatic conditions. The breeding season begins in mid-March, when the days get warmer and sunny, and goes until mid-July, when the females lay the eggs. Juveniles hatch 3 months later. It is common to see this lizard sunbathing, although during the summer it tends to avoid the peak hours.

Genetic studies indicate that Ocellated lizards colonized the Berlenga Island around 9000 to 10 000 years ago. This locally differentiated population, although not a subspecies, shows a number of morphological and behavioural characteristics of adaptation to island conditions that distinguishes it from the mainland populations. Having evolved with virtually no natural predators in the last thousand years, the Berlenga lizards show some loosening of anti-predatory mechanisms such as running much worse than the continental lizards and being tamer towards potential predators. Moreover, while continental males are territorial and very aggressive towards their competitors, in Berlenga Island the insular lizards live in communal settlements. Scientists believe that this behaviour is a result of the confinement in a little island where the available habitat is scarce. In such conditions, the encounters between males are more frequent, leading to more combats to defend territories and resulting in excessive energy spending by males. In these conditions over time, the least aggressive individuals were naturally selected and the population of Ocellated lizards in Berlenga Island became less territorial and more tolerant of each other and fighting less compared to the mainland congeners. Since 1985, the population of lizards was the subject of demographic studies, with comprehensive annual censuses to monitor its population between 1991 and 2004. From 1994 to 2001 the project "monitoring and control of the population of lizards on the island of Berlenga", found that the population of lizards had a sharp decline in the number of individuals from year to year and was approaching dangerously close to extinction. In 1991 there were about 100 lizards distributed in most of the Berlenga Island and O-da-Velha Islet. In 1998, only 9 individuals were seen in the lighthouse area and only one in the O-da-Velha Islet. In 2001, only 6 lizards were detected in Berlenga, which shows how alarming the situation was.

The huge increase of Yellow-legged gull population is probably the main factor that contributed to the drastic reduction of Ocellated lizards in Berlengas. Gulls take up much space, which clearly decreases the available area for the lizards, especially because many new nests were built exactly on the same areas of the burrows previously occupied by lizards.

The impact of gulls over the lizards is not caused by predation but instead by mortality originated from breeding gulls defending their nests; in a population with such small numbers, this situation became very significant. During the incubation period, Black rats may also prey the lizard eggs, buried in the soil without parental care. Rabbits can also contribute to the destruction of lizards clutches due to its intense activity when digging new tunnels. In 1999, a recovery plan targeting the increase of lizards in the island to ensure the viability of the population was implemented. Between 1999 and 2000, 21 captive bred Ocellated lizards were released in a predator-free outdoor enclosure, but these efforts were apparently unsuccessful. The last record of Ocellated lizard in Berlengas dates from 2010.