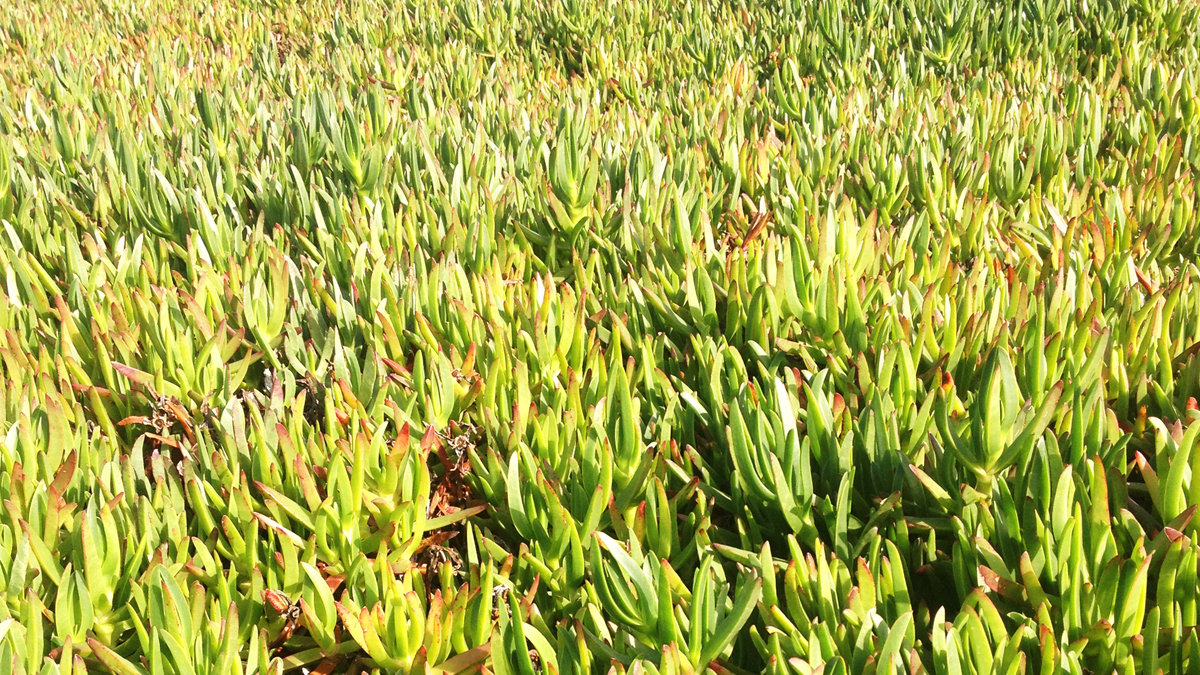 In order to "improve" nature, making it "prettier" or "more diverse", the introduction of invasive exotic species generally results in uncontrolled and destructive situations for the ecosystem. The Hottentog fig is one of those cases.

The Hottentot fig is native to South Africa but it was introduced in several countries for ornamental and medicinal purposes, and to contain the movement of sand dunes and control soil erosion. However, its impressive vegetative propagation (i.e. the ability to reproduce without seeds) and seed production led to the colonization of large areas where it completely dominates the available space. As such, the Hottentot fig is considered an invasive plant in most places where it was introduced. The uncontrolled expansion of Hottentot fig happened especially in places with conditions similar to Mediterranean climates, such as southwestern Australia, California, Chile's central coast and obviously the Mediterranean basin; but also in places where climatic conditions are not so favourable, as in the British Isles, Ireland and New Zealand. In Portugal, the Hottentot fig also spread uncontrollably over virtually the entire Atlantic coast. Therefore, it is considered an invasive species since 1999, being its plantation prohibited in our country.

Where the Hottentot fig is able to develop, it quickly spreads and takes over the space. It is a very resistant plant that tolerates high solar exposure and high levels of salinity, surviving several months of drought. Growing uncontrollably, the Hottentot fig forms continuous dense carpets that are almost impenetrable by other plants. Once installed, it continues growing and the carpets gradually become thicker, greatly increasing the organic matter content, which results in the change of soil properties (increases nitrogen and carbon and reduces ph), which, in turn, has serious consequences for germination, survival, growth and reproduction of other plants. Thus, the presence of Hottentot fig is a serious threat to the conservation of natural vegetation and leads to profound changes in the ecosystem dynamics.
The way the Hottentot fig arrived to Berlengas is similar to many sites along the Portuguese coast and the world. It was first planted in the fifties’ in the fishermen's neighbourhood, but in the absence of any control; it quickly spread throughout several slopes of the island. Studies indicate that in Berlengas the Hottentot fig can grow on any type of substrate, display or inclination, even in the steepest cliffs! In addition to the optimal environmental conditions for its growth, it is known that black rats, rabbits and gulls are natural seed dispersers, which facilitate its spread - gulls may be responsible for the dispersion of Hottentot fig to the Farilhões Islets. In these conditions the Hottentot fig has grown exponentially and has the potential to take over the entire archipelago. Even if Hottentot fig flowers create a beautiful impact on the island's scenery, in the places where it settled, it covers the entire soil and compete with native vegetation. For example, Flanders slope is almost completely covered with Hottentot fig, with only few places where native plants still grow. With its dense leaves and strong roots, the Hottentot fig is a major threat to the conservation of rare plants, such as the Hoop pettitcoat daffodil, and endemic plants, such as the Berlengas Sea thrift, whose slow growth does not allow it to compete with the Hottentot fig.
Another problem related to the Hottentot fig invasion has to do with the reduction in the number of cavities available for Cory’s shearwaters to nest and the impossibility for these birds to dig new nests in the soil.
LIFE Berlengas project will remove completely the Hottentot fig from Berlenga island and surrounding islets. By the end of 2014 the Hottentot fig completely covered the slopes of the Monastery cove and Flanders, and is still present in other parts of the island. As the projects started in July 2014, this situation is being reversed. Following international guidelines, the project team began removing the Hottentot fig along stripes. The plant is removed manually, rolled up and left to dry on top of Hottentot fig mats below. In a second phase, the stripes left with Hottentot fig will be removed. By 2018, we expect to have removed the entire Hottentot fig from Berlenga island!