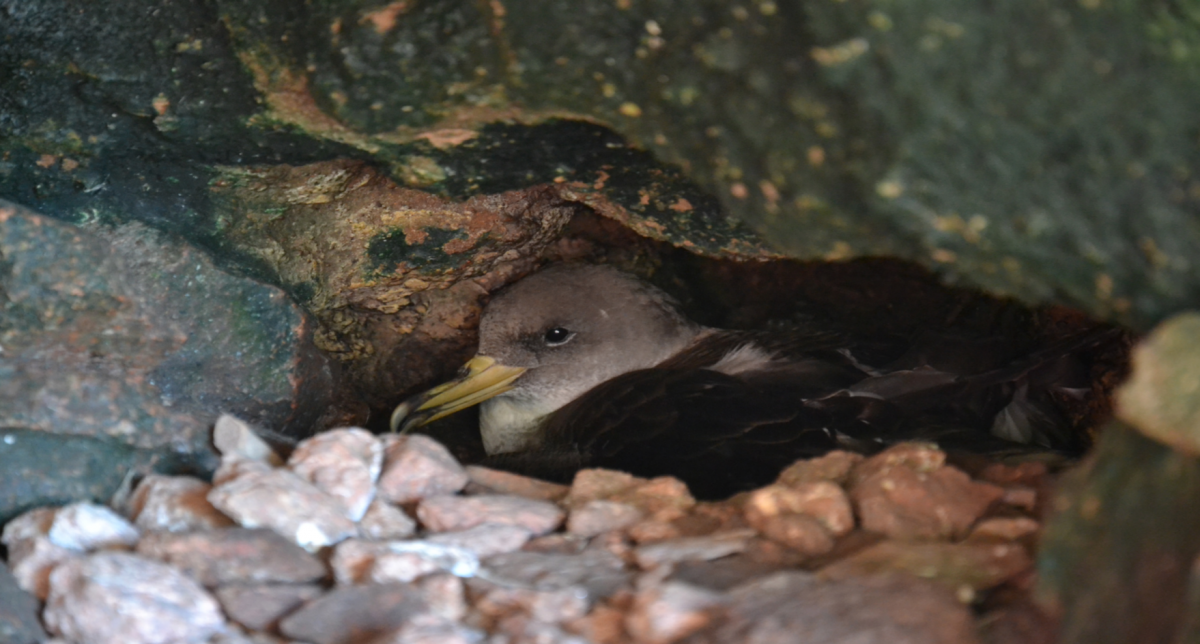 Cory’s shearwater is a pelagic seabird that occurs in almost all the Portuguese Exclusive Economic Zone (EEZ). During the breeding season is easily seen from shore but it is very rare in the winter. Cory’s shearwater is probably the most abundant seabird breeding in Portugal (Azores, Madeira and Berlengas). In Berlengas, where it nests in almost all the islands and islets, the population was estimated at 980-1070 pairs in 2011. Since the 1980s the breeding population of Berlengas had an annual increase of 10.1% as a result of conservation measures.

The breeding season begins in early spring, when the first birds arrive to Berlengas between February and March. At this point, one can hear its distinctive call, especially at night. The nests are located in natural cavities, such as rocky crevices and under stones, or can be dug in the ground, being very rare to find exposed nests. Cory’s shearwaters lay one egg only, and are therefore very vulnerable to predators, including the black rat. Incubation lasts about 55 days and, after hatching, by the end of July, chicks are left alone in the nest, while the parents forage out in the ocean for several consecutive days. Because of ocean circulation and upwelling, the waters of Berlengas Special Protection Area (SPA) are very rich in food, particularly fish such as sardines and mackerel. Thus, most Cory’s forage nearby the colony, to about 50 km away - although some individuals were documented to travel up to 270 km away! Adult birds feed juveniles in the nest during the night. Fledging juveniles leave the nests in early November. In this time of year it is common to see large groups of shearwaters ("rafts") resting on the water near Berlengas. After breeding, most Cory’s shearwaters travel to their wintering grounds in the South Atlantic, while some stay in the North Atlantic and others fly to the Indian Ocean.

In Portugal, the nesting population is considered Vulnerable (VU) so its conservation must be a priority. The main threats to the conservation of Cory’s shearwater in Berlengas are predation of juveniles by black rat and Yellow-legged gull, lack of cavities for nesting and bycatch in fishing gears. LIFE Berlengas aims to reduce those threats. In particular, we will eradicate black rat from the archipelago and test new techniques to control the super abundant Yellow-legged gull population. One hundred new nests will bet set in Berlenga Island for Cory’s since this measure has been shown to be very effective for the conservation of Cory’s in Berlengas. Finally, we will conduct a study to assess the impact of fisheries on seabirds and test methods to reduce mortality of seabirds from interaction with fishing gears.

Did you know
Cory’s Shearwater is a pelagic seabird. At sea the species occurs throughout the Portuguese Economic Exclusive Zone and rarely is seen during the winter.